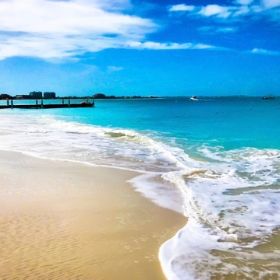 After the Hurricane: Turks and Caicos is Open for Business

September 2017 was a heartbreaking month in the Caribbean, with two Category 5 hurricanes razing island after island. If you watched the news reports in the U.S., you’d probably think that there are hardly any inhabitable enough to visit yet.

At least, that’s what I thought as I stared longingly at my travel bucket list. As the hurricanes tore mercilessly across half my list and the images of devastation rolled in, my heart broke for these beautiful places and their people—who depend on tourism for the majority of their economies.

It’s true that a few islands will take over a year (or more) to recover, but I’m writing this on the plane back from my winter adventure, and I can tell you: Turks and Caicos is open for business.

In fact, I could barely tell that anything had happened. If I didn’t know in advance that Turks and Caicos took a direct hit from Hurricane Irma (and just barely missed being in Hurricane Maria’s eye), I wouldn’t have even known that it was impacted at all.

I expected some resorts to be back up and to see devastation inland, but in traveling on Provo from the airport to a resort in Grace Bay, and then from Grace Bay to Long Bay, the signs of hurricane damage are still few and far between—even off of the resorts.

Only by riding around with a local who pointed out the brand new power poles, a few roofs here and there that were under repair, and some palm trees that looked a little ragged, was I able to see remnants of Irma and Maria’s wrath.

Yes—it was a tough hit for the British territory. Yes, some people were without power for 62 days. And yes—there was a marina that suffered around $12M in damage. All that you probably saw on the news. But what you haven’t seen reported is how quickly Provo cleaned up—and they did one helluva job at it.

I can absolutely, positively confirm that Turks and Caicos is ready for visitors: the water is BEAUTIFUL, the resorts on Provo are OPEN, and the tours are in full swing.

So if Turks and Caicos was on your list of places to visit, go now. And if it’s not—holy hell it really should be. I’ve travelled to quite a few islands in the last several years, and this one tops my list.

Go to Turks and Caicos.

Contact Us | Shipping & Returns | Our Story | Our Mission | The Nauti Blog

Due to COVID-19, we are experiencing production and shipping delays. Please note that orders may take up to two weeks (10 business days) to be manufactured before shipping. If you'd prefer to wait to place your order, please sign up for our email list, and we'll send out a big ole celebratory notification as soon as things return to normal. Otherwise, remember to check on your friends and family, and get some sunshine (safely) if you can. It's good for the soul. Stay safe and healthy! Dismiss